In one of my other guises, as the chap who runs the Friends of Charles Darwin, last week I was one of the co-sponsors of a talk in Hebden Bridge by the extremely popular American science blogger PZ Myers.

Wanting to capture some images of the event, I dithered about taking a whole pile of photography gear with me, including my on-camera flash unit, but eventually decided that having some fat, bearded bloke blundering around in the dark, firing off flashes, would probably spoil the event for everyone else, and might well distract PZ from his talk. So, instead, I simply took two lenses, ramped the ISO setting up really high on my camera, and shot discreetly from the sidelines using available light (which, in this case, was a single spotlight, beaming in on PZ, and a data projector illuminating a projection screen behind him).

I have to say, I'm still old-fashioned enough to be apprehensive of using very high ISO settings for fear of the heavy grain usually associated with them. But modern digital camera sensors have advanced in leaps and bounds, and are getting pretty damn good in low-light conditions. Even so, the photos I took still required some tweaking in Adobe Lightroom afterwards to remove the spotlight's reddish colour-cast, retrieve some detail from the over-exposed spotlit areas, lighten the shadows, reduce noise, sharpen the image, and so on.

I offer these before and after images to illustrate the sort of improvements you can make to a photograph with a few simple software tweaks.

These days, photographs are taken with the camera, but they're made in the computer. 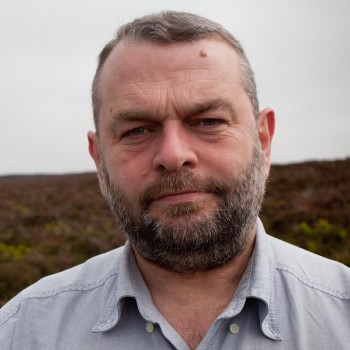